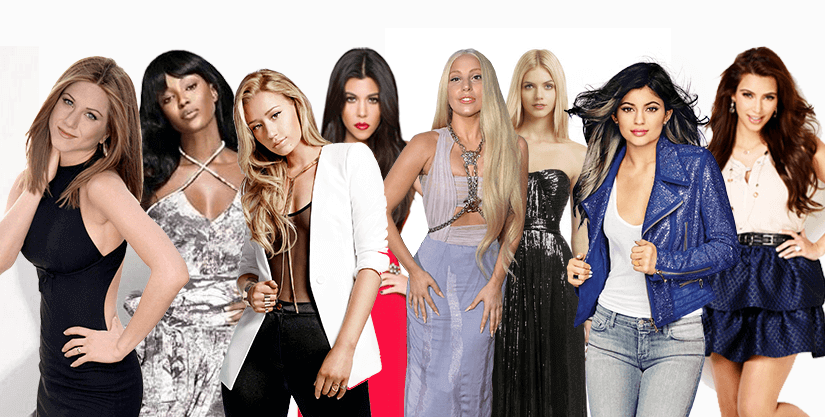 Hollywood has adopted plastic surgery as its own and it is not considered rare or odd anymore. Almost every celebrity has undergone some sort of cosmetic surgery to enhance their physical appeal. Whether it is a non-invasive Botox treatment or surgical procedures, like liposuction and breast augmentation, most celebrities get them done. Although most of the superstars get these treatments done yet not all of them are so vocal about their experience. While some stars are quite proud of getting cosmetic surgery procedures done and do not try hiding them, others do. However, in the age of the Internet, having any kind of cosmetic surgery becomes obvious with before and after pictures.

Have a look at 8 Hollywood celebrities who underwent plastic surgery procedures.

Jennifer Aniston, the beautiful American film actress, director, and producer, has undergone plastic surgery. Many actresses age gracefully and aging does not affect their beauty in a considerable manner. However, they still undergo cosmetic surgery procedures to help them retain their youthful look and Aniston is one of them. Her before and after pictures show that she had had Botox and fillers, as her face looks tighter and puffier. Moreover, her nose seems to be done too.

Iggy Azaela, an Australian rapper, has herself admitted that she got breast augmentation done. She was not afraid or ashamed of revealing her secret and she was quite confident about her breasts. According to her, she wanted to have breast augmentation done for a long time. Her friends had advised her to make the secret public about four months after her surgery.

Naomi Campbell has been a supermodel since she was 15 years old. She is among the top three most in-demand and recognizable models of the late ’80s and ’90s. Although she is stunning as she is yet she got cosmetic surgery procedures done to improve her appearance. Her cheeks are now fuller and it is obvious that she had cheek augmentation done. Her nose also looks more prominent and pointed. Her breasts are now fuller and rounder and her body shape have also improved. It seems like she had breast augmentation and liposuction. Botox injections and fillers are now very common and she got them as well.

Kylie’s appearance has changed drastically over the last few years and it is because of the cosmetic surgery procedures. For months Kylie denied getting any treatments but her fuller pout is clear evidence of Botox injections and fillers. Moreover, she had breast augmentation, chin implant, upper eyelid surgery, nose job, and jaw reshaping. Several people have commented that the reason behind her going under the knife is her insecurity about her body.

Kim Kardashian – one of the most stunning and beautiful superstars – has also undergone cosmetic surgery procedures. Not only one but she had various cosmetic procedures done to different parts of her body. These procedures include Botox injections, fillers, breast augmentation, and butt implants.

Kim’s sister, Kourtney Kardashian, has also undergone cosmetic surgery procedures. She had her breast implants when she was in college and she did not keep it a secret. She also had Rhinoplasty and butt implant surgery done later.

Nicole Kidman is naturally beautiful but the change in her facial appearance tells that she has undergone cosmetic treatments. The most obvious treatment seems to be the Botox injections. Initially, they made her face look puffy and swelled but later on, her face became normal. She has publicly accepted getting Botox injections.

Lady Gaga is one of those celebrities, who have great talent and a huge fan base. Her music has always been very popular among her fans. However, a lot of controversial news has always accompanied her successful career, with her plastic surgery activity being one. Botox injections and lip augmentation are common cosmetic surgery procedures and Lady Gaga had them too. Besides that, she also underwent facelift surgery, nose job, and breast augmentation.

In short, cosmetic surgery procedures have become very common among celebrities. Almost all the stunning celebrities choose to undergo plastic surgery procedures to improve their appearance more. So, if you are considering plastic surgery, you can always consult the surgeons at Dubai Cosmetic Surgery. We also provide free online consultation which you can avail by filling the online form.